The aim of the conference hosted by the three Local Authority led cross border networks working in the Irish Border and Northern Ireland Border Region was to look at ways to bring Local Authorities to the forefront of cross border collaboration and partnership. The three groups have all been involved in managing substantial amounts of INTERREG funding since 2003 and as a result the successful management of these funds has been the majority of their focus. The conference therefore sought to take a collective look at common concerns facing border regions and to look at a proactive way forward for the three groups collectively.

The timing of the conference was apt giving the reform process which both jurisdictions are currently undergoing. The conference was attended by all of the Local Authorities, North and South from the entire Border Region representing a total population of over 1.6 million people.

Delegates were also delighted to listen to keynote speakers Republic of Ireland Minister of State for the Department of Arts, Heritage and Gaeltacht Affairs and the Department of Communication, Energy and Natural Resources Mr Joe McHugh and Northern Ireland Minister for the Environment Mark H Durkin. Both Ministers demonstrated an understanding of the issues affecting border areas and the importance of ongoing collaboration between Local Authorities.

Chairman of East Border Region Cllr Alan McDowell welcomed the event, “I am delighted to see so many Elected Members here today. We all have a common goal which is to improve the sustainability and prosperity of our respective regions and we cannot underestimate the collective strength we have as three bodies coming together”.

The conference concluded with a conference networking dinner. A follow up report will be prepared by Officials and further meetings of the three groups scheduled for the coming months. 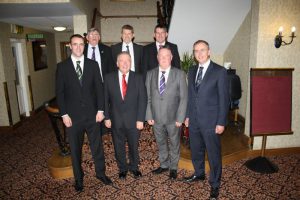