At its Annual General Meeting held on Thursday 11th December 2014, in the Canal Court Hotel, Newry East Border Region were delighted to provide members with an overview of the success of the Organisation during the past year.  The EBR is a cross border local authority led Organisation, based in Newry, who are part-financed by the European Union’s INTERREG IVA Cross-border Programme.

Speaking at the conference Ms Pamela Arthurs, Chief Executive provided members with an overview of the activity of EBR over the year and of the 11 INTERREG IVA funded projects which EBR administer. The 11 projects total just over €15.5 million and span the fields of Enterprise, Tourism and Environment.

The focus of this year’s AGM was on the promotion of the East Border Region as a smart, sustainable and inclusive partnership which is aligned with the current EU2020 targets.  During proceedings members were informed of the success of EBR projects through dissemination of the tangible results which already have been achieved. Benefits experienced range from cost savings through energy management, new job creation, collaborative business opportunities and networking, tourism promotion and energy savings through employment of renewable technologies. For a full breakdown of East Border Region projects please see www.eastborderregion.com

The East Border Region Board appointed Cllr Peter Savage from Louth County Council as Chairman for the incoming year while Cllr Arnold Hatch from Craigavon Borough Council and Cllr Gillian Toole from Meath County Councils were elected as Vice-Chairs.

Speaking at the Annual General Meeting Cllr Savage stated that he was delighted and honoured to accept the position of Chairperson of the East Border Region Board.  He paid tribute to the outgoing Chair, Councillor Alan McDowell and stated that he hoped that he could emulate his predecessors’ achievements. Cllr Savage also spoke of the challenges ahead for EBR “The period between funding programmes is often a difficult and uncertain period and this is no different for EBR. We hope to work with our Local Authority members and SEUPB in order to ensure as smooth a transition as possible into the new programming period. We are also faced with changes in our Northern Local Authorities with the reform of Local Government. I would like to wish our colleagues who are elected to the new shadow Councils well with their new roles and pay tribute to those who are ending their careers in elected office”.

City and District, Craigavon, Ards and North Down Boroughs. In recent years the Board has established itself as being at the forefront of cross border economic development. In the incoming year the Board will be focussing on the continued roll out and closure of the remaining INTERREG IVA projects, developing projects for submission to the forthcoming INTERREG V Programmes and developing links with our colleagues in Europe. 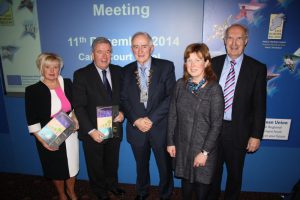