Members of the East Border Region (EBR) Board and the Newry Mourne and Down – Louth Memorandum of Understanding Committee met with MEP and Vice President of the European Parliament Mairead McGuinness on Friday 22nd July and Matt Carthy and Martina Anderson MEPs on Monday 25th July in the Canal Court Hotel, Newry to discuss the potentially severe impact on the people of the cross region of the UK’s decision to leave the European Union.

EBR has been a key player in the cross border funding arena since 1976 and in the last 15 years has delivered over €40 million of European funds which has helped the cross border region to grow and prosper.  EBR has been working on behalf of Local Authorities to develop cross border and Transnational EU Projects to enhance the economy of our region.  EBR are involved in 19 EU projects to the value of €132million and these projects are now at risk as SEUPB have advised that all EU Programmes, including INTERREG VA and Peace IV are forming part of the Brexit negotiations:

“It is anticipated that all EU Programmes including PEACE IV and INTERREG VA will form part of the discussions that are to take place between the devolved administrations, UK government and the European Union during the upcoming negotiations”

Mairead McGuinness MEP stated: “The impact of the Brexit vote on the border region is hugely significant. Ongoing and important development work in the area, funded jointly by the EU and the two Governments risks being stalled completely unless there is clarity about the future of the funding mechanisms and renewed commitment to implementing projects worth in the region of €132 million. The project promoters need clarity about the future and I will work to try and ensure that this impasse does not negatively impact on these projects. In the discussions about Brexit, it is important to remember that the impact is at local level, among communities and businesses and nowhere is it more critical to ensure continuity and certainty than in the border region of my constituency of Midlands North West.”

Matt Carthy and Martina Anderson welcomed interventions from Organisations such as EBR “We encourage groups to raise their voices to ensure that the wishes of those from Ireland who voted to remain are respected. The border region has suffered immensely as a result of partition and hardening partition will only have a negative impact on the lives of the people who live, work and study in the border region”.

In addition to working on cross border collaboration, EBR has built up excellent partner networks with other EU member states and has devoted considerable time and resources to the development of transnational projects.  EBR are Lead Partner on 7 transnational projects and have been working with organisations in Spain, France, Portugal, Germany, Netherlands, Belgium, Norway and the Faroe Islands.

All of these cross border and transnational projects are at various stages in the approval process; no Letters of Offer have been issued for any of this funding.

EBR have met with Lady Sylvia Hermon MP and Mickey Brady MP as well as a number of MLA’s and TD’s from the cross border region over the past number of weeks. A meeting is also scheduled with Margaret Ritchie MP on Thursday 28th June.  EBR will endeavour to continue to ensure the needs of the people of the cross border region are heard at both national Government level and on the wider European stage. 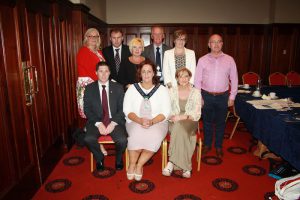