Members of the East Border Region (EBR) Board and the Newry Mourne and Down – Louth Memorandum of Understanding Committee met with Northern Ireland Finance Minister Máirtín Ó Muilleoir on Thursday 25th August in Newry to discuss the potentially severe impact on the people of the cross region of the UK’s decision to leave the European Union.

EBR has been a key player in the cross border funding arena since 1976 and in the last 15 years has delivered over €40 million of European funds which has helped the cross border region to grow and prosper.  EBR has been working on behalf of Local Authorities to develop cross border and Transnational EU Projects to enhance the economy of our region.  EBR are involved in 19 EU projects to the value of €132million and these projects are now at risk as SEUPB have advised that all EU Programmes, including INTERREG VA and Peace IV are forming part of the Brexit negotiations:

“It is anticipated that all EU Programmes including PEACE IV and INTERREG VA will form part of the discussions that are to take place between the devolved administrations, UK government and the European Union during the upcoming negotiations”

In addition to working on cross border collaboration, EBR has built up excellent partner networks with other EU member states and has devoted considerable time and resources to the development of transnational projects.  EBR are Lead Partner on 7 transnational projects and have been working with organisations in Spain, France, Portugal, Germany, Netherlands, Belgium, Norway, Iceland and the Faroe Islands.

All of these cross border and transnational projects are at various stages in the approval process; no Letters of Offer have been issued for any of this funding.

The Chancellor recently announced that the Treasury will only guarantee funding for those projects that are signed off before his Autumn statement.

Chairman of East Border Region Cllr Mickey Ruane outlined concerns about the future of INTERREG projects should they not be able to access EU funds. “It is absolutely vital that the cross border and transnational projects which we have in the pipeline progress through the approval process as soon as possible and certainly before the Chancellors deadline. These projects represent much needed investment in our region and to lose them would result in a significant loss to our economy”.

Finance Minister Máirtín Ó Muilleoir has said he is doing everything in his power to ensure the timely release of vital EU INTERREG funds as a key date for bids to be considered looms.

The Minister said: “EBR is a driving force in a number of projects submitted for EU funding.

“These are important projects that go right to the heart of communities. The projects aim to support research and innovation, protect the environment and develop sustainable transport.

“The councillors and representatives I met stressed to me their determination to ensure their bids for up to €37 million to support transformative cross-border programmes are approved at the early September meetings of the INTERREG panel.

“While we have been left in a state of uncertainty by the British government, the one thing I am absolutely certain of is that no funds will be lost as a result of lack of will or action on my part or on the part of project partners.” 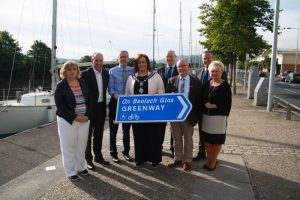