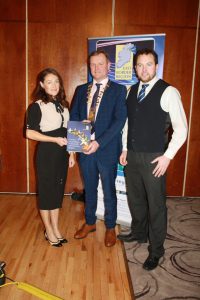 East Border Region Ltd held its Annual General Meeting on Friday 6th December 2019, in the Canal Court Hotel, Newry. With an excellent turn out of members EBR were delighted to provide members with an Annual Report which highlighted the success of the Organisation during the past year. EBR is currently involved in the financial management of eight INTERREG VA projects which total €91 million. Members were also informed that an INTERREG VA Project to install 73 Electric Vehicle fast chargers valued at €9.3 million is awaiting approval.

The focus of this year’s AGM was on the future of East Border Region and the continued promotion of the Region as a smart, competitive, sustainable and inclusive region. During proceedings members were divided into groups and collectively discussed a series of questions on the future role and remit of the Organisation. Feedback from each group will feed into a new ‘Collaborative Framework for Cross Border Co-operation 2020 – 2025′ which is currently being developed for East Border Region and will be launched in the Spring of 2020.

Speaking at the Annual General Meeting Cllr Savage stated that he was delighted and honoured to accept the position of Chairperson of the East Border Region Board. He paid tribute to the outgoing Chair, Councillor Aidan Campbell and stated that he hoped that he could emulate his predecessors’ achievements. Cllr Savage a relative newcomer to East Border Region stated that he looks forward to the challenges that lie ahead. “In the short few months I have been a Board Member I have been very impressed with the drive and work ethic within the Organisation. I have no doubt that we will all work hard over the next few months to ensure our new Framework is truly representative of the needs of our Region. In addition, we will continue our focus on the roll out of the existing INTERREG VA projects while looking ahead to the new PEACE PLUS Programme”.